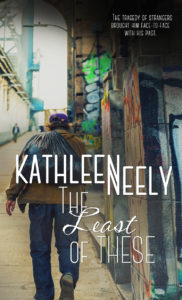 Book:  The Least of These

Journalist Scott Harrington sets out to write a documentary on the lives of three homeless men. He hopes to win a prestigious award and his father’s respect. In the process, he uncovers stories of heartbreak, trauma, and rejection, causing him to revisit his own tragic past and the guilty secret that he holds.

Claire Bassett has been searching for her husband who went missing a year ago. The attentions of another man cause her to question if she should continue to search or move on with her life. As Scott and Claire’s stories overlap, will there be restoration or rejection? 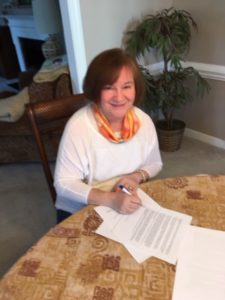 Kathleen Neely is the author of The Street Singer, Beauty for Ashes, and The Least of These.  Her fourth novel, True North, will be released in July, 2021. She is a former elementary teacher. Following her years in the classroom, she moved into administration, serving as an elementary principal at Eden Christian Academy in Pittsburgh, PA and at Shannon Forest Christian School in Greenville, SC. Kathleen is an alumnus of Slippery Rock University in Pennsylvania and Regent University in Virginia.

Among her writing accomplishments, Kathleen won second place in a short story contest through ACFW-VA for her short story “The Missing Piece” and an honorable mention for her story “The Dance”. Both were published in a Christmas anthology. Her novel, The Least of These, was awarded first place in the 2015 Fresh Voices contest through Almost an Author. She has numerous devotions published through Christian Devotions. She continues to speak to students about writing. Kathleen is a member of Association of Christian Fiction Writers.

She resides in Greenville, SC with her husband, two cats, and one dog. She enjoys time with family, visiting her two grandsons, traveling, and reading.

Please welcome, Kathleen Neely. I’m happy to connect with Kathleen through this Q&A.

Q: Do you have any preparation quirks? (For example, do you have a favorite coffee mug you use before you sit down at your computer to write?)

A: I can’t say that I have quirks, but every author approaches the writing table differently. My preparation time doesn’t begin at the computer. I start with a sketchy idea, then spend time getting to know my characters. If I look like I’m sitting staring at a blank wall, plans are taking place. As characters come alive, a new excitement drives me to the computer. I don’t begin with an outline, but instead, I create a list of major events—those big scenes that drive the novel. Once begun, I spend time with my characters daily. I liken it to an actor playing a roll, except that I must play many rolls if I’m to know my characters well.

Q: Do you have a favorite setting? Is it a real location or fictional?

A: I’m a Pittsburgher transplanted to South Carolina. You’ll find most of my writing in the Carolinas, but The Least of These took me back to the Burgh (every Pittsburgher will know that phrase!) My Carolina settings include Asheville, Greenville, Raleigh, Wilmington, and one fictional SC town. I’ve gone completely rogue on my newest work in progress. It’s set in New York City.

Q: What was your favorite character to write?

A: My novel titled The Street Singer features a character by the name of Adda Marsh, aka Adaline. As Adaline, the world knew her as a Grammy-nominated singer. In her senior years, she’s now Adda, her given name, and sings on a street corner for donations. I loved writing Adda for a variety of reasons. First, her dialect reflected her illiterate Mississippi upbringing. It’s been applauded by readers and used as a positive example by a writing workshop leader. Secondly, she embodies strength and weakness, trust and caution. Her story unfolds on her own terms as she shares one item at a time from her Things to Remember box. She won’t be rushed on this one aspect of life where she still has control. It was a pleasure to get to know this lady.

Q: What is your favorite part of your newest released book?

A: The Least of These is my newest released book, but it was the first book I wrote. It contracted simultaneously with The Street Singer, and shortly after, Beauty for Ashes received a contract. There’s no real rhyme or reason in the order of release. All three were scheduled, and The Least of These happened to be last. I think every author’s heart holds a special spot for their first completed novel. The Least of These won first place in the fiction category in a contest titled Fresh Voices. My favorite part may be the manner in which Scott’s story and Claire’s story unfolded separately while all evidence told us their lives would intersect. I hope readers feel the mounting tension as I felt while writing.

Q: Are you at work on a new novel? Can you tell us a little about it?

A: I mentioned earlier that I had gone rogue on my pattern of a southern setting and placed my work-in-progress in New York City. That was a strategic setting because the main character is a literary agent. New York remains the hub of the publishing world. Without disclosing too much of a soon-to-be completed novel, my main character Kate finds her world crumbling with a faltering marriage and a health crisis. She is diagnosed with Parkinson’s Disease. Ryan, her attorney husband adds his own trauma as one of his cases puts the family in danger.

Thank you, Kathleen. I can’t wait to read The Least of These and for your upcoming novel to release.

Because I said so — and other adventures in Parenting, February 3

For Him and My Family, February 11

To celebrate her tour, Kathleen is giving away the grand prize of a copy of the book!!

Be sure to comment on the blog stops for nine extra entries into the giveaway! Click the link below to enter.