Get a behind the scenes look at The Fragrance of Violets each day for the next seven days and enter a giveaway. 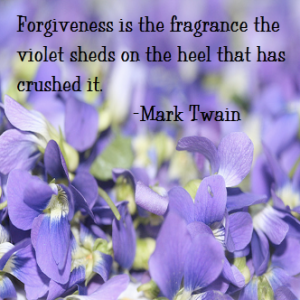 The title The Fragrance of Violets was derived from a Mark Twain quote … which turned out not to be from Mark Twain. The quote, “Forgiveness is the fragrance that the violet sheds on the heel that has crushed it,” could not be officially attributed to the famous wit, and was, in fact, seen in various forms (usually using other types of flowers) as early as the 1700s.

But the metaphor reflects what I wanted to show in the novel.

Fiona struggles with forgiving a father-figure who abandoned her. Nason, the father-figure, can only see his justifications—until someone wrongs him and Nason wants an apology.

There are several sides to forgiveness:

Needing someone who has wronged you to ask for forgiveness;

recognizing you have wronged someone and asking for forgiveness;

accepting that someone who has wronged you may never apologize;

forgiving that person regardless of whether they have asked for it;

We explore each of these facets and the characters live them out in The Fragrance of Violets.

Forgiveness can be difficult and eat away at us, but once received or given the sweet aroma is that of freedom from the clutches of the enemy, the origin of lies.

Have you struggled with forgiveness? What aspects are hardest for you?

You can pre-order before Ma 17 and receive bonus material. https://www.celebratelitpublishing.com/posts/book/the-fragrance-of-violets/

Enter a giveaway for a $25 Amazon gift certificate by leaving a comment AND clicking on the link.