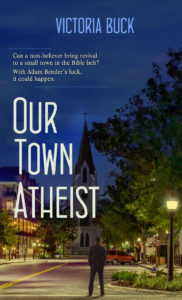 Small-town banker Adam Bender tackles a robber and loses. But that’s not what shakes the foundations of his well-managed life. He awakens in the hospital to the vision of an angel. But that’s not what casts doubt on his reasonable judgment. Turns out the angel is only a beautiful doctor—someone Adam wants to get to know better.

The bank robber is on the loose and out to get Adam. News spreads in the gossipy little town of Adam’s misfortune, his love interest, and his…atheism? He’d thought he could keep that a secret. But Adam Bender can handle it. Or, can he?

What happens one night on a mountain road leaves him questioning his worldview. And his sanity. And soon the whole town is waiting to find out if what Adam saw will alter his unbelief. 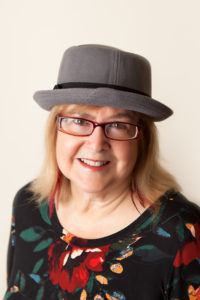 Victoria Buck is a native Floridian running a small business with her husband, who teaches her everything she needs to know about both melodrama and comic relief. Wake the Dead is her debut novel. Killswitch is the follow-up to book one. Transfusion is the last book in the trilogy about the world’s first transhuman.

Now, on to other stories! Victoria is currently working on two present-day novels. No transhumans or insurrections. Of course, there has to be a bit of a weird twist!

Victoria, thank you for joining me today for a Q&A.

Q. Do you have a favorite setting? Is it a real location or fictional?
A. My first three novels (Wake the Dead trilogy) are set, for the most part, in locations I’ve never visited. Our Town Atheist takes place in a fictitious small town in Georgia. My favorite real-life setting is any of a number of small towns in Georgia where my husband and I often escape for a quick getaway. I’m not surprised all the pleasant trips to Georgia led me to imagine the town of Crossroads as the setting for Our Town Atheist.

Q. What was your favorite character to write?
A. That’s a good question. And a hard one to answer. I love all my characters. Well, there are a couple of antagonists who are not so lovable. I didn’t know when I started writing that I would feel a deep connection to these made-up people. I do remember when I first felt that bond. I was writing my first novel. (Not my first published novel—this one was turned out to be my practice novel.) There’s a character named David Klein. One day while I was writing, he just came alive. I started to think I saw him when I was out in public. Soon after, the other characters in that unpublished story brought out the same emotion. When I started writing Wake the Dead, I wasn’t surprised when Chase Sterling came alive. As for being the most fun to write, it would have to be Chase. I wrote him into an impossible situation, fatally wounded him, gave a new body, and turned him into a post-human superhero. That was fun.

Q. If you are multi-published author, which book was the hardest to write? Why?
The one I’m currently writing is the hardest! Why? Because I keep putting off finishing it. I could be done in a couple of weeks, but I just can’t let it end. I’m not sure why, but I don’t think the story will conclude until I can answer that question.

Q. What is your favorite part of your newest released book?
If you love Hallmark movies, you might not appreciate the ending of Our Town Atheist. But I love the way it ends. It’s a bit cryptic, but I think most Christians will understand. As for the atheist who reads it, he or she might say, “Yeah, I don’t get it. But at least it doesn’t end like a Hallmark movie.”

Q. Are you at work on a new novel? Can you tell us a little about it?
A. I already mentioned that my new novel has been the hardest to write. It takes place in the same fictitious small town as Our Town Atheist, although it is in no way a sequel. It’s a new story with new characters, but some of the minor characters reappear. One of the two main characters is loosely based on a man my husband and I met once in one of those small Georgia towns we visit. The man indicated he was a Jones but didn’t tell us his first name. Because of some odd statements he made, we’ve always referred to that mysterious stranger as Jesus Jones. My soon-to-be-finished (I hope) novel focuses on an ill-matched friendship between a middle-aged widow and young man who calls himself Jesus Jones.

Thank you, Victoria. I can’t wait to read Our Town Atheist and then about Jesus Jones.

Because I said so — and other adventures in Parenting, January 15

For Him and My Family, January 21

To celebrate her tour, Victoria is giving away the grand prize package of an eBook copy of the book and a porkpie hat!!

Be sure to comment on the blog stops for nine extra entries into the giveaway! Click the link below to enter.