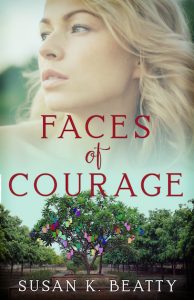 Let’s get acquainted with Olivia Stanford, the main character in my novel Faces of Courage, as I interview her.

You’re a wife and mother. Tell us about your children.

Olivia: Oh, I love to talk about my children. Zoe, 7, is my fashion diva, a little fussy, and she loves to boss Dylan around. Dylan,5, always cracks me up. He loves adventure and telling jokes. Sometimes they aren’t always the most appropriate for a child. I can’t quite figure out where he gets them since he and Zoe are homeschooled.

Where did you meet your husband?

Olivia: I met Frank in college. My adoptive parents had recently died, and I was lonely. He seemed like a Godsend, loving and kind. Besides, he was a football player, so he was sort of a hunk.

Where did you grow up and how did you get to California?

Olivia: I grew up in many different foster homes and finally an adoptive home in small towns near Buffalo, New York. After Frank and I were married, we moved to Philadelphia where he was on a professional Arena Football team. When he was taken off the roster due to his head injuries, he got a job in Pasadena, California. We moved to Villa Park in Orange County.

Tell us about your unique home.

Olivia: It is very special. It was designed by the famous architect, Joseph Eichler, whose designs were examples of Modernist architecture that has come to be known as “California Modern.” Most of the Eichler homes are in San Francisco with only a few in Orange County. Although this was my dream home, my husband furnished it himself with some over-the-top modern touches. My favorite room is the family room that was more homey and warmer. It was hard leaving it to live in a condo.

Your best friends are Carmen and Vanessa, two very different personalities. Tell us about them.

Olivia: Vanessa lived near my adoptive parents, and we soon became best friends. Although she didn’t appreciate it when I became a Christian in junior high, we’ve remained friends all these years, and we both had the opportunity to move from New York to Orange County (California). She can be opinionated and doesn’t hesitate to let you know those opinions, but she’d good hearted. Carmen became our neighbor when we moved to Orange County. Our kids are similar ages and best friends. We sometimes homeschool together. Carmen is the perfect friend–always there for you. I don’t know what I would have done without her during my cancer.

You said your husband “seemed loving and kind.” Wasn’t he? What happened?

Olivia: Well, he was at first, but about eight years into our marriage he became angry and controlling. I attributed it to the severe headaches he suffered from his football injuries. But much later, long after his abuse began to escalate into the physical, I began to realize he was suffering from a form of PTSD. It took my mother-in-law to convince me I needed to find the courage to do something about it.

How did you find the courage?

Olivia: My mother-in-law shared how the beginning of courage was faith, and I needed to trust my faith in God and even pray He would increase my faith. It wasn’t easy, but the more I trusted, the more courage I had. I was even able to find the grit I needed to act.

Eventually, you had another, perhaps greater need for courage. Tell us about how your increased courage helped you face a breast cancer diagnosis.

Olivia: That was hard. In the beginning, I didn’t think I had any courage to get through it. But I guess faith is like a muscle, the more you exercise it, the stronger it becomes. During surgery and treatments, I tried to remember what it was like when I had courage to face Frank and duplicated that. The Lord was merciful and strengthened me–especially when Frank stopped supporting me.

What one piece of advice would you give someone who does not feel brave?

Olivia: I would tell anyone facing a difficult situation and doesn’t feel brave enough to live up to the challenge, to turn it over to the Lord. I know that sounds simplistic and maybe unattainable. But in turning it over to the Lord, you are not passive, you actively seek Him to help you strengthen your faith. And in the midst of that, you find where you can exercise your grit. Like David when he had faith the Lord of Armies who sent him to slay Goliath and would give him victory, but David’s grit is shown when he ran straight to Goliath and hurled the stones. You can find your courage at the intersection of faith and grit.

Thank you, Olivia, for sharing your story with us and your inspirational challenge.