Flashes from the Rock

What would cause a family to leave the conveniences of Southern California suburbia and settle for a one-room cabin without amenities out in the barren desert? To some, that probably sounds like heaven. To others of us, it sounds like a fate to be avoided at all costs.

In Nancy Brashear’s novel Gunnysack Hell, the O’Brien family has given it all up for the so-called safety of the desert. In her prequel story, Flashes from Rock, the author shows us the father, Rand, and his life before the move. A life that fizzles but offers new opportunities.

The story is filled with glimpses of 1960 technology, engineering, aviation, and the obsession with extraterrestrials. In fact, as a bonus, Brashear provides an alien ship’s worth of facts and references about the phenomena.

You’ll want to read Flashes from the Rock. It won’t matter whether you read it before or after Gunnysack Hell, but be sure to read both. 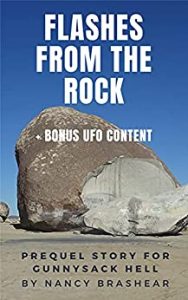 Flashes from the Rock is a prequel story to the psychological thriller, Gunnysack Hell.

What sends a man into the empty desert, away from everything he thought he wanted? For some, it’s the specter of past mistakes. For some, it’s the lure of gold. For Rand O’Brien, it began with a simple request: “Will you write an article for my newsletter, Flashes from the Rock?”

Accolades for Nancy Brashear’s latest seamless fusion of truth and imagination, situated earlier in the 60s amid the popular space convention/time travel trend of that time. A SoCal native herself, Nancy’s authentic voice brings alive the desert, the automotive industry, and how it felt when a family man lost his job in that era. Can’t wait to read what she writes next!

This quick dip into mid-twentieth century America introduces Rand O’Brien. Anyone who has read Gunnysack Hell will understand a little better the character of a man who would take his family from the comforts of their suburban home to a homestead cabin in the California desert. Anyone who hasn’t read it will find themselves heading straight to their bookseller to read more about Rand and his family in Gunnysack Hell.

In “Flashes from the Rock,” Rand and Nick make a short flight to the Mojave Desert. In the 1960s, Giant Rock, which is close to Landers and the Joshua Tree Monument, was a hub of activity for people interested in UFOs and humans claiming to have been abducted by space aliens. George Van Tassel ran his Space Conventions out there from 1954-1978, with the highest attendance in 1959 estimated close to 10,000 people.

Events leading to the family’s relocation begin when Van Tassel makes Rand an offer that he can’t refuse. While “Flashes” is fictional, it is set within the context of some true (and imaginary) events that occurred in Giant Rock during the time frame of this short story. The bonus content explains some of the strange phenomena that affected Rand’s narrative.